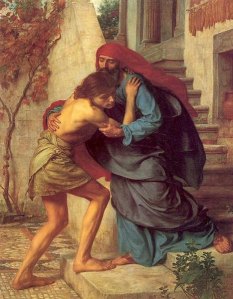 What was the difference between the younger and the elder brother that meant that one could enjoy the feast and the other could not? The Prodigal or younger son feasted with the Father, while the Elder Brother did not go in, even though the Father begged him.

Why is it that some Christians experience the power and presence of God and some do do not? Why do some of God’s children live victorious lives while others are in a state of constant defeat? The difference is not explained by the presence or absence of the Father. He is present with every child of His. 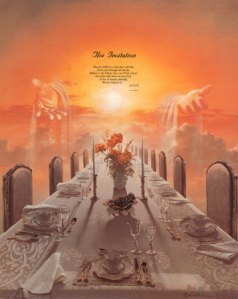 Peter wrote “Sanctify in your hearts Christ as Lord” (1 Peter 3:15) Elder Brothers will never feast with the Father until they realize He is Lord of every aspect of their life. Elder Brothers must let go of everything, and realize it is all the Father’s. He is Lord!

The Prodigal returned with nothing. Even his reputation and standing were gone. He had become as nothing. He had no where to go but to the Father’s arms. Instead of scorn, his Father kissed him and opened his storehouse of grace to him. Can you feel the great reverence and humility that must have overwhelmed the prodigal’s heart? Such a Father! Such a Relationship! His Father became the Lord of his life! 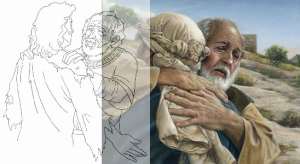 Father: I want your Life! Teach me that I am nothing without you. Nothing in the world matters except my relationship with YOU!

In the Parable of the Prodigal Son, I always identified with the Elder Brother, but in a good way. I was the hard working, father pleasing son. I tried to do the responsible things, while my younger brother went off and broke our father’s heart. God has opened my eyes to see just how lost the Elder Brother was, and to see my life in the same light. So the question I find myself asking is this, “What must the Elder Brother realize in order to bring about a better ending to this parable?”

This morning the Spirit brought Saul of Tarsus to mind. He was the classic Elder Brother, yet his life had an amazing turnaround. He was at that point in our parable where the Father was pleading with him to come and join the feast with his found and forgiven younger brother. He thought he was OK, that he was the righteous one.

But Saul, blinded by a bright light heard the words, “I am Jesus, the one you are persecuting!” 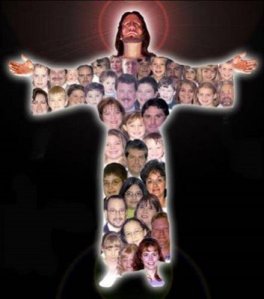 Saul (now called Paul) wrote years later that “we, who are many, are one body in Christ, and we all belong to one another.” Rom 12:5.

If Elder Brothers in the church are to re-write the ending of the Parable of the Prodigal Son, we must see our connectedness with those lost younger brothers. We must see that seeking after them is the way we strengthen our relationship with our Father!

Father: Open my heart to see and feel the needs of your heart, the relationship you desire with the lost younger brothers. May I see that my apathy toward younger brothers is really apathy and coldness toward You! 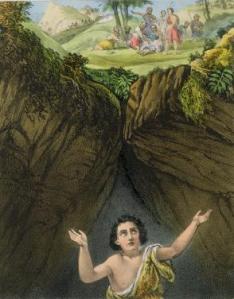 Joseph was a younger brother, but had the characteristics of an elder brother. He was responsible, industrious, kept out of trouble. What was the driving force of Joseph that enabled him to escape the normal pitfalls of being either a lost younger or a lost elder brother? I think the driving force of Joseph was his confidence in God’s plan for his life. Joseph saw his life, no matter the place or dungeon he was in, as in the PURPOSE of GOD!

In Genesis 50:20 Joseph addresses his elder brothers: “You meant evil against me; but God meant it for good!” Earlier in chapter 45 he revealed his awareness that “God sent me before you to preserve life.” This awareness of God’s divine purpose for our life is what elder and younger brothers need to have.

If we focus on ourselves, on our things as the two lost sons did, we fall away from the Father’s heart.

But when we draw near to him, whether in the pigstye or the crop field, we will see that He is accomplishing something Divine, Holy, even Loving. God has a purpose for each path He has us on. Some may resent their parents, some thier spouse, some their job, some their circumstances. God has a purpose through it all. When we focus on His heart and His purpose, we will come to our senses (our God Sense) and willingly accept His grace, His will, His plan.

What has God planned for your life? Seek to know His heart, and He will run to you and shower you with kisses. Joseph knew this, even in the deepest, darkest dungeon. That is why he could proclaim, “God meant it for good!”